It was 5.30 am when Luis woke me up. We went out of the bus and felt the fresh weather cut off my sleepiness right away. We took our bicycles and panniers, and mount them. While we were doing it, no one shouting or honk in front of the gate of the bus company offering taxi or other transportation services. And when we started to pedal our bicycles, the city was just about to awake. It was a calm morning that we use to feel it. We felt safe immediately. It was very different compared to our experience when we were in the northern Peruvian coast that brought us here, to Cajamarca, Peru.

We chose to escape to Cajamarca because it’s the nearest main city in northern Andes Region and a scene of one of the most significant events in the history of the Andean world. It imposing features of the Colonial architecture become homey countryside or stone fortresses of archaeological interest in surprising surroundings. The famous Baths of the Inca and the relaxing pools of hot spring waters, The windows of Otuzco, or The Stone Forest of The monks are some examples of the attractions.

Let me show you the places we went that might you not .

THE CITY OF CAJAMARCA

Although Cajamarca is one of the main cities in northern Peru, it wasn’t too big. The historical area is quite centered that we could walk around and enjoyed them.

The Cathedral is located in front of the main plaza. We got amazed by the sun illuminated the volcanic rock facade, decorated with beautiful carvings. When we passed it in the morning that I didn’t miss to capture it. It’s one of the most representative religious constructions in a baroque style of Colonial Peru. Click here to see the sketch that Luís did. 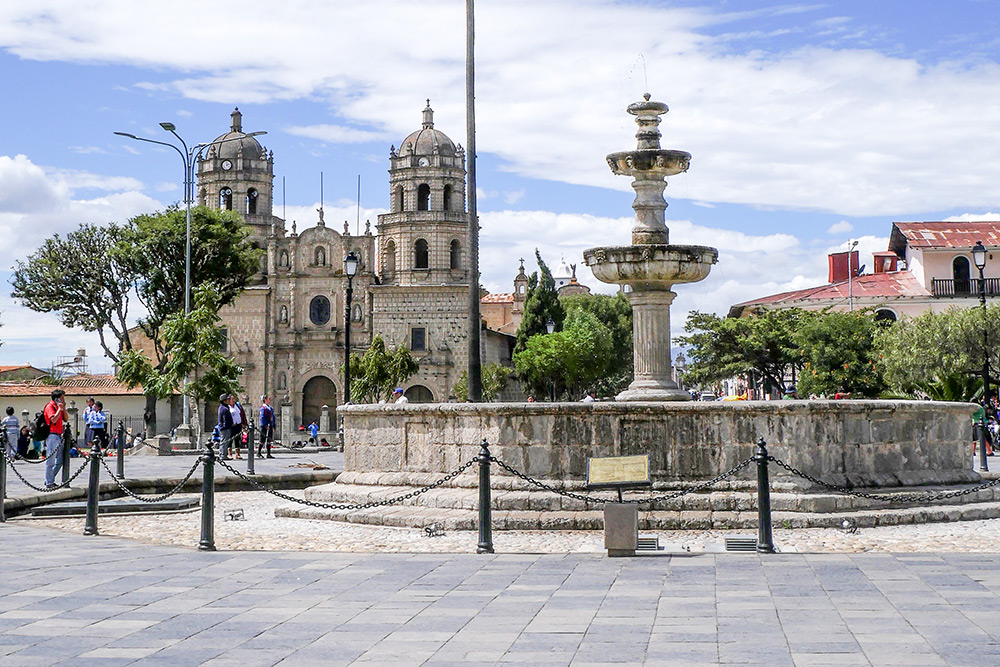 It’s also located in front of the main square. People often have mistaken that this church is the actual cathedral in Cajamarca, Peru due it has the dome.

In order to arrive at the top of the viewpoint, it is necessary to defeat a set of some lofty stairs. Although we didn’t climb up, we believe the effort is worth the trouble, because, on a par the great view of the city and the countryside of Cajamarca, Peru, we saw from the bottom the beautiful gardens of native flowers and the chapel raised in honor of the Virgin of Fátima is appraised. It is located a few blocks from the Plaza de Armas, Main Square.

The Conjunto Monumental Belén Complex is one of most important Colonial architectonic jewels of the City. Next to the main building was the Hospital for Men and the Medical Museum. There is also an Archaeological and Ethnographic Museum nearby. And the rooms were the pavilions of the Hospital for Women – Nuestra Señora de la Piedad – Our Lady of the Mercy. The complex is on the sixth block of the Jirón Belén.

Instead of taking public transports, we decided to ride our bicycles and went around Cajamarca, Peru. Sometimes when we think that it’s not too far from where we stay, we prefer to wandered around with the bicycles. Aside from the fact that we are  free to do it in our rhythm, it’s so nice to travel without the heavy panniers. We did the following route in a day.

The area with rare formations from volcanic rock served as a funerary site for pre-Inca civilizations and as a storage to the ancient Inca. However, they are actually 600-year-old burial sites from the Cajamarca, Peru culture. The Spanish destroyed the original tombs, but the structures that remain are still impressive and gave a good sense of the history surrounding. I learn that there are a total of 337 niches, which resemble windows. The niches reach depths of up to 8 or 10 meters and have rectangular or quadrangular entrances which are 50-60 centimeters tall. What we like it the most was not much tourist around when we arrived in the morning.

6. The Otuzco Windows – Baths of the Inca

South America is full of thermal baths, and we’ve been elsewhere that us made a bit of a letdown. For us, this famous place was a bit too commercial. This spring has tons of hot water. Though it’s very low on mineral content so seems almost drinkable and has no smell. The original thermals itself are available to walk around but they are extremely hot (above 70°C), so it was impossible to go in. Instead, we took 20 minutes of massage for PEN 20 per person. After more than a year that I didn’t have massage treatment, it was so great and I knew that my body thanks for it.

7. Baths of the Inca – Cajamarca

On our way back to Cajamarca, we made a stop at Inca monument. It shows The 14 warriors that guard the Inca road of Cajamarca, Peru and this is one of a few monuments with a focus on indigenous cultures rather than on the Spanish colonizers. These sculpture of the Incas, considered an art, represent the children of the Sun.

However, with all of those places around us, we couldn’t just stay a night and leave on the next morning. We spent 2 nights here. Although Cajamarca, Peru isn’t as famous as Lima or Cuzco, it has a great history for the country. There are many good reasons to visit this historic city and its surrounding area. And in here was the first city that we feel safe in Peru that we could re-joy our trip by bicycle again.

I had never traveled so much in my life and I didn’t even know that you could go on a bike trip, but as I like sports, I immediately fell in love with the way we see the world on two wheels. Today I am the one who documents all the photography and videos and all kinds of logistics for the project. Ah, I also love food! 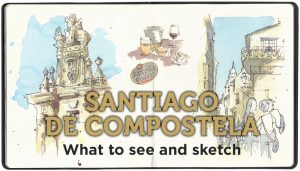 Visite Santiago de Compostela, Spain: What to See and Sketch 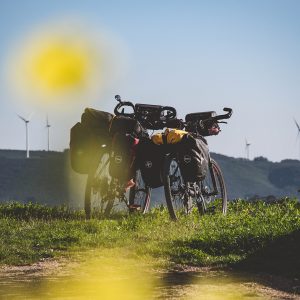 Luis and Anisa’s travel site. Sketches, books, bike routes, and tips to inspire and help other travelers on their bike tours and urban sketches.

Share your e-mail to receive our monthly newsletter about the latest articles, books, workshops or exhibitions…