The road from Puerto Colombia to Cartagena – Colombia is flat that goes 114 km. and mostly, we will ride through the highway. In this case, there will be not much in between once we get in. Jose Franco, our friend from Cienaga, told us that there are only two restaurants where we can stop to rest, but after km 60, we will be alone until Cartagena.

There is another way, but we have to go a detour with unpleasant villages, which Jose Franco hardly avoid us to do. Since he knows better his country and we trust him, there we were…, pedaling our loaded bicycle on the flat-boring-tarred road.

The weather was still fresh when we left Puerto Colombia. I pedaled my bicycle forcefully, enjoying the fresh breeze on my skin. But then I had to slow down when Luís reminds me not to burnout since we need to cycle more than 100 km that day.

It was around 10 am when we reached the last restaurant that Jose Franco mentioned earlier than we thought. Too early to have lunch, but we would like to reach our next stop before the sun is gone. So, we had, anyway. An hour after that, we continued our journey towards Cartagena – Colombia.

How many kilometers your buttock able to sit comfortably on the saddle? My case is more or less the same as Luís. After km 80, our bum-bum starting to feel uncomfortable. We change our way to sit – one side for some time – to let the other side breathe and rest. And when we couldn’t hold it but want to keep pedaling, we just pushing it harder, stand for a while, let the bicycle rolling and feel the wind on our butt. LOL.

When we finally see the toll gate, we were getting excited! We are arriving!

Long story short, we arrived at our host place around 12.30 pm. Don’t you see it? In less than a month, we did such impressive progress! If the first day we were dying on doing 14 km, we did 114 km on the 17th day! It was the longest road we cycled in a day in Colombia. We are proud of ourselves that day.

However, right after we had lunch, we crashed and woke up 12 hours after the next day.

It was six in the morning when we woke up. After having breakfast prepared by our host, we chat with him a little before we stroll to the old town. Although, a little chat doesn’t finish in 5 or 10 minutes. So, when we left home, the sun was already high. Located on the Caribbean coast, Cartagena – Colombia is known for having a tropical climate with high humidity. From where we stayed until the walled city, it took us 20 minutes walking. The path wasn’t interesting, to be honest.

Once we reach the old town, we instantly realized why tourists love this place. We have to admit that Cartagena – Colombia is one of the most beautiful cities we’ve ever been to in this country. It has mixed charms between the colonial buildings as it is one of the oldest cities in Colombia and the modern architecture around the north area – near the Rafael Nunez International Airport – where we passed the day before.

Inside the walls, we were amazed by the colors around us. While I’m getting excited, Luís getting confused. Haha… For him, it was difficult to choose what to draw. ‘All the houses and corners would give a good picture’, he said.

On that day, we just roaming around. The tiredness of the day before with the heat made us low. After we bought an avocado, we went home to rest and come back to the old town again the next day.

When we back on the next morning, the shops are not open yet. There was very little movement of cars. The sun has not fallen on our back and the shadows bring volume to the silent streets. It feels nice to be in Cartagena like this.

Luís’ mind is glued to the blue building he saw the day before. He knew exactly where it was, he just had to choose where to sit. At the moment he start to sketch with loose geometry lines, a man passes on a bicycle. He captured it in the sketch. He imagined himself rode on that streets with that bicycle with a white hat. The colors were the biggest challenge to highlight the shades of Cartagena – Colombia. Eventhough the heat raised, he did a few sketches on that day. You can see more sketches here.

One of the sketches was the replica of the Canaletas Fountain with the hope to capture some Barcelona in it. Legend said if you drink water from this fountain, you’ll always return to Barcelona. Maybe we will come again to Cartagena – Colombia someday?

It was impossible not to see the fruit ladies around the downtown streets of Cartagena – Colombia. They are very black-skinned, wear bright-colored dresses, and carry baskets of fruit on their heads. With earrings, necklaces made of wood, and sandals. They were easily spotted from the distance. They known as Palenqueras. We felt like talking with and Luís was eager to sketch them. They call tourists by embrace the phrase

Which means at your service. Each fruit basket is a bane for anyone who likes tropical fruits.

Two locals sit next to Belinda and ask her for two bowls of fruit. Luís watched and sketched it with his imagination. The baskets were to take away and he took the chance to know how much it had cost them. A bowl of peeled fruit ready to eat for COP 10,000 and an opportunity to sketch her is his ticket to go. He sat beside Belinda, and started to capture her focus-gentle expression while she works.

When Luís finished his sketch, he showed it to Belinda. She’s smiling. Too bad, he could not always give the sketch. If he did, he’ll be without any records.

Belinda told us that she’s from a town called San Basilio de Palenque. It is where the immense slaves – from Africa, from the Congo and Angola – were brought by the Spaniards and entered Cartagena – Colombia, took refuge. In here, they fought for their freedom and independence. And they did it. They remained for history as the first African people to gain their freedom, throughout America. After this conversation, it was clear in our heads that we have to go to there. 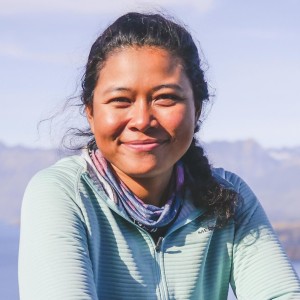 I had never traveled so much in my life and I didn’t even know that you could go on a bike trip, but as I like sports, I immediately fell in love with the way we see the world on two wheels. Today I am the one who documents all the photography and videos and all kinds of logistics for the project. Ah, I also love food!
All Posts

It was six in the morning in Cartagena when I woke up. I looked out the window and saw the clear sky. I dressed and packed the "office" bag with me.

Visit Medellin, what to see and sketch

Medellin was in fact known as a dangerous city. Even now, there are still some places that are better to avoid. However, we feel safe during our stay and Luís had fun to sketch Medellin.

The first impression of the village was rural areas and has strong resonances of African culture.

After 4 months exploring we discovered that Colombia is actually worth to put in any destination bucket list. This is our list of our best 14 places!

Why 13 hours in Toronto, Canada was a really bad choice!

Even though Santa Marta is known as a popular destination on the Carribean coast, there are more interesting places to explore outside.
Previous
Next
Play Video

Travel Videos from Around the World

Share your email to receive our monthly newsletter about our last posts, books, workshops or exhibitions…

We use cookies to ensure that we give you the best experience on our website.
← Back to login